THE ARITHMETIC OF WAR: 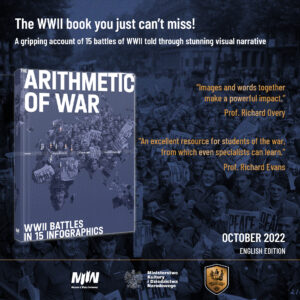 The latest book from Museum of the Second World War in Gdańsk, The Arithmetic of War: WWII Battles in 15 Infographics, is an engaging presentation of iconic battles of WWII. The battle accounts, with in-depth statistical data and attractive graphics have been merged into coherent, thought-provoking material. For those interested in WWII history, the book is simply a must-read!

Over the past decades, thousands of publications on WWII have been launched, from critical academic analyses to comic books and illustrated publications for children. The creators of the book The Arithmetic of War: WWII Battles in 15 Infographics have gone their own way. Hard statistics and facts have been rewritten into less traditional presentation forms to tell the epic stories of the legendary WWII battles.

It would not be an exaggeration to state that the book is ground-breaking in terms of its approach to  conventional historical storytelling. It is not a typical album, but rather a repository of knowledge in which traditional historical narrative is combined with bold, unorthodox illustrative content. In all, the book contains 129 infographics, 60 original maps, 298 archival photographs, and 40 drawings of weapons, vehicles, and aircraft. Reproductions of contemporary WWII posters have also been included to better convey the realities of the wartime era.

“The battle elements are visually exciting, conveying the essence of the struggle that they chronicle. […] No-one looking at Arithmetic of War can fail to understand the shape and scope of World War II and the awful cost it produced. Images and words together make a powerful impact. […] This is an important learning tool on many fronts and it deserves wide public engagement”, writes Prof. Richard Overy in his review of the book.

Imaginative graphics and textual presentations of the 15 most important battles on the fronts of WWII are at the core of the book – profiles of WWII leaders and commanders, the military equipment used by the fighting armies, and, above all, numerous statistical summaries in both descriptive and graphic form have all come together to the delight of WWII aficionados. Much of this data, in its form of presentation, may surprise even some historians. In turn, the book’s inventive illustrative layer helps to follow the textual narrative almost seamlessly, moving from battle to battle, and prompts readers to discover the war’s different theatres at greater length.

In his review Professor Richard Evans writes that “this beautifully designed and illustrated presentation of major battles of World War II provides a mass of information, much of it new, from the Polish perspective on the war, along with an admirably clear and illuminating account of the wider conflict, from Western Europe to the Far East. An excellent resource for students of the war, from which even specialists can learn”.

And it is precisely the synthesis of the creative combination of great war images, graphics, and words that is behind the authors’ original idea for this book. The reader-friendly language of historical facts and figures is at the same time articulate and evocative; the text and the graphics are one entity, the book is thus accessible to anyone, regardless of levels of reader’s historical awareness. The book’s first edition is in English. The English language edition of The Arithmetic makes it available to worldwide public (Polish edition coming in 2023).

The making of the book involved 18 specialists from Museum of the Second World War in Gdańsk. The end result is a visually stunning album whose graphics-and-text layout is a feast for the eyes while offering readers much knowledge and historical experience.

The publication contains, among other archival content, photographic material from the resources of the National Digital Archive.